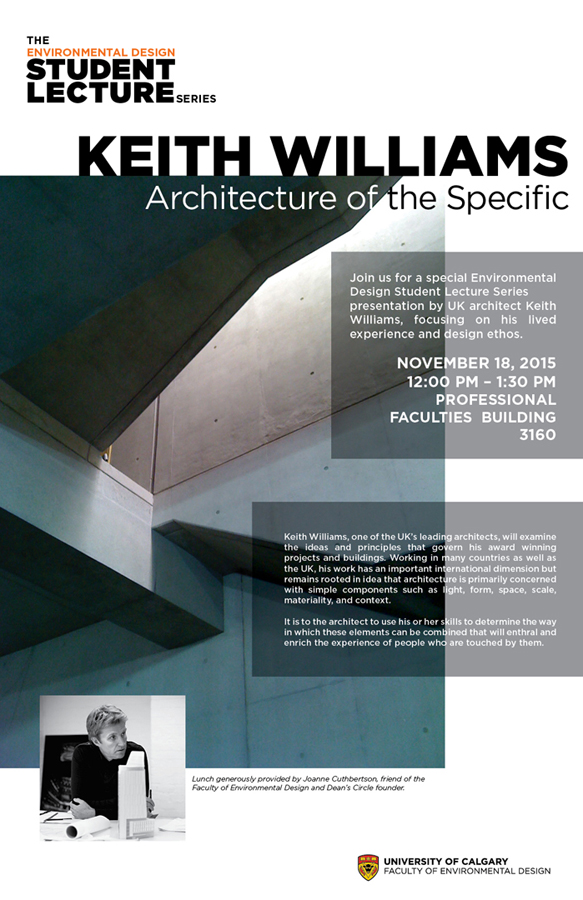 On 18 November, in his first major lecture to be given in Canada, Keith Williams spoke to a packed house of architecture students and staff in the lecture hall of the Professional Faculties Building 3160 at the University of Calgary. Keith was invited to speak as part of the Environmental Design Student Lecture Series and during the talk he expanded on the ideas, architectural principles and design philosophy that have underpinned his practice’s work and his many award winning buildings, since it was founded in 2001.

Keith explored elements of architectural history setting the context for discussion on his major European buildings and went on to describe underlying principles such as light, form, space and materiality; elements that for him represent the essence of architecture. He also underscored his belief in the power of the generative sketch and sketch model, elements which he believes are the key tools in the architect’s armoury. He ended by unveiling his first major project in Canada, the new Lloydminster Cultural and Science Centre in Lloydminster, Saskatchewan, western Canada which is being jointly undertaken with S2 Architecture of Calgary and Edmonton.

Professor Nancy Pollock-Ellwand, Dean of the Faculty of Environmental Design introduced the talk and Linus Murphy, principal of S2 Architecture was also in attendance.