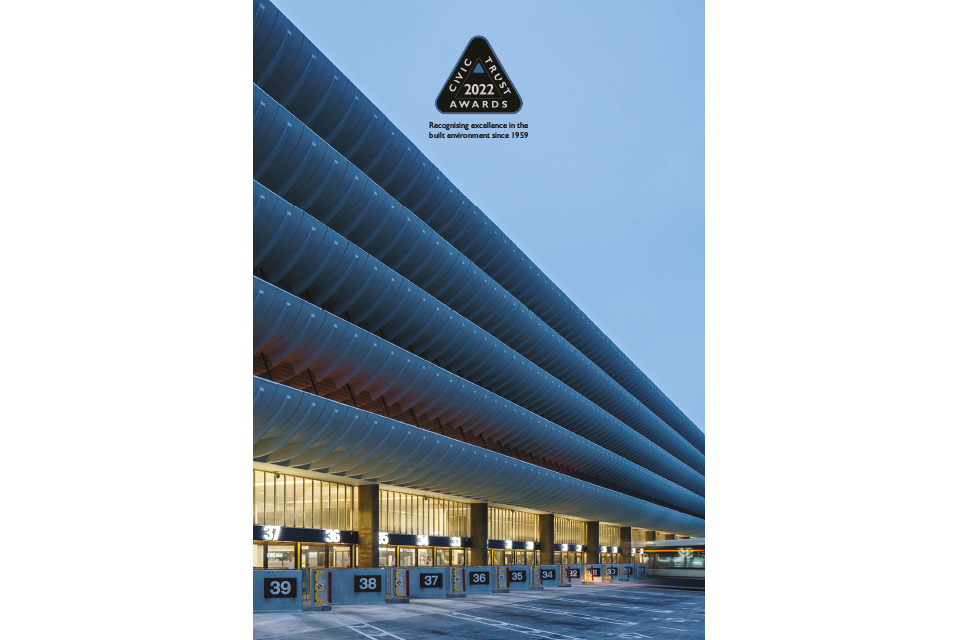 Keith Williams’ forward to the awards brochure, was published as the awards were announced on YouTube this morning at 10am as is reproduced below.

“My note must begin by paying tribute to two outstanding people who were actively involved with the Civic Trust Awards and who have been sadly lost to us in recent times.

Chris Wilkinson OBE RA, highly distinguished architect and patron of the Civic Trust Awards from 2007 until his death, passed away on 14 December 2021 aged 76. Our thoughts and best wishes go to his wife Diana and their family and to Jim Eyre, who with Chris, established the highly successful, international architectural firm Wilkinson Eyre. Winner of numerous Civic Trust Awards, Chris was a charming and surprisingly humble man given his achievements. His passing is a great loss to the world of architecture and all those who knew him.

Max Fordham OBE, was an extraordinarily gifted environmental engineer who pioneered sustainability and green thinking in the built environment in advance of almost everybody else. Founder of the highly influential environmental engineering partnership Max Fordham LLP, Max was a member of the Civic Trust Awards National Panel from 2013 to 2017, advocating with an indefatigable passion for sustainability to be integral to all projects that the Panel would award. Max passed away on 4 January 2022 aged 88. Our thoughts are with his family and the team at Max Fordham LLP.

Both Chris and Max leave us with so many fond memories and will be much missed.

Turning now to the 2022 Awards themselves.

To begin, the Civic Trust Awards were started in 1959 and at 63 years young, is Europe’s longest running continuous architectural and built environment awards programme and one of the most important and prestigious.

Submission numbers this year despite the pandemic held up remarkably well. Of the 160 schemes submitted, 76 were referred by regional assessors to the Civic Trust Awards National Panel for consideration within either the Award or Highly Commended categories.

As ever, the Panel met over three days in November and December, to determine which projects were to receive either Civic Trust Awards or be Highly Commended, and also which schemes were to receive the Special Awards. This year once again, Covid 19 forced the National Panel’s judging processes to be virtual but the level of interrogation, debate and rigour was no different from the norm, but of course National Panel long to be able get back into the same room.

The National Panel is a moderating body, who take account of the regional assessors’ recommendations and make reference to peer projects of this and earlier years, debating carefully each and every project before arriving at its decision. The Panel is diverse and includes architects, urban designers, people from government, commissioning clients, engineers, accessibility, sustainability, and from PR and architectural journalistic backgrounds. Panel members, 13 in total, are all distinguished in their particular field and I am grateful for the time that they donate and the energy, enthusiasm, rigour and insight that they bring to the judging process. The National Panel sets very high standards in making its judgements but that must be right if the ethos of excellence in the built environment that the Civic Trust Awards embodies is to be maintained. Before any award can be made, each project is rigorously assessed in the context of current best practice in terms of accessibility and the sustainability metric and I expect our sustainability criteria in particular to tighten sharply over the next few years, as matters of zero carbon and climate change become ever more pressing.

Despite the extraordinary nature of our times, the past year has yielded another exceptional crop of projects.

For the current 2022 awards round, submissions were received from the UK, Belgium, Canada, Denmark, UAE, USA and Somaliland, reflecting the awards’ continuing international reach.

Stand out projects among many, include  FarmED, Chatto Court and Wilmott Court at the Frampton Park Estate, Go Cycle: Kingston Cycle Hub, the refurbishment of Preston Bus Station, Pooley New Bridge in Cumbria, Wadham College in Oxford and the Tom Patterson Theatre, Ontario.

From 5 projects shortlisted in the Pro-Tem Awards for temporary buildings and structures, projects of note include Hackney Bridge in Newham, Greater London by Turner Works. And Ebury Edge in Westminster, Greater London by Jan Kattein Architects. Past winners include Blood Swept Lands and Seas of Red at the Tower of London, the Serpentine Pavilion (twice) and the British Pavilion for the Milan Expo. I encourage all with buildings of a temporary nature to please submit for the 2023 Awards.

The Civic Trust Awards has to be financially self-sustaining as it receives no state support, and so I would like to thank Derwent London whose continued sponsorship is so highly valued, and our supporting members who enable this important awards programme to thrive.

My sincere thanks also to the volunteer assessors for their time visiting so many buildings, for writing their reports and for their initial recommendations to National Panel, a process which continued with a surprising degree of normality given the pandemic.

Through more than 60 years, the Civic Trust Awards have paralleled much change, and the many great buildings awarded demonstrate that our desire to make outstanding works of civic architecture have transcended challenge, and grown from opportunity in every age however challenging. As an eternal optimist, I have little doubt that the extraordinary buildings that we have yet to make will do the same, and I do hope that the 2023 awards round will see us all gradually reverting to something like more normal times.