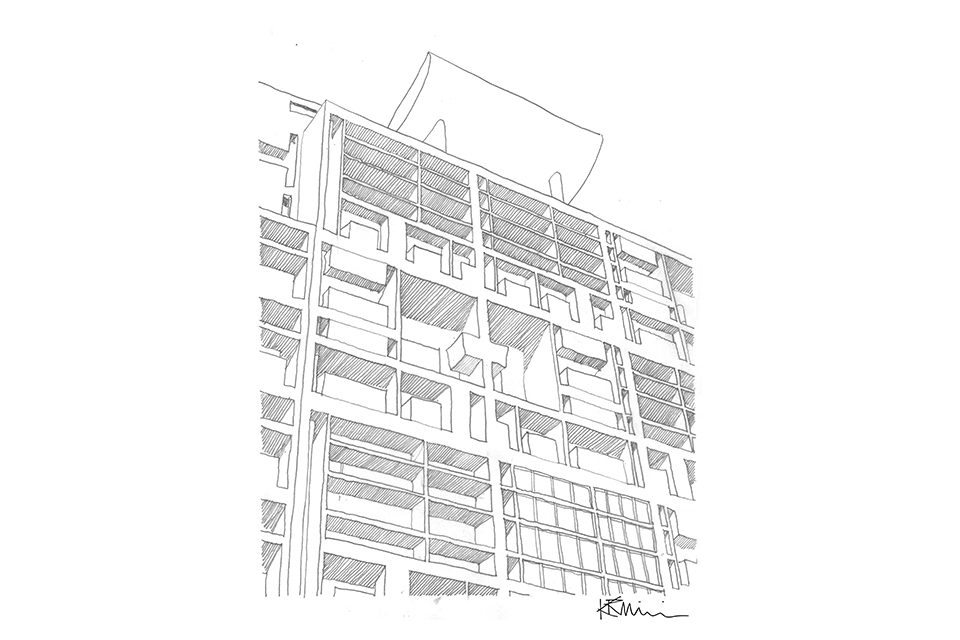 50 Wonders Keith Williams Capitol Complex Chandigarh India resulted from Keith being invited to contribute an article as part of Building Design’s 50 Wonders series. To coincide with BD’s 50th anniversary leading architects are being asked to select and then describe key architectural works that have inspired them and which they might regard as “Wonders” reflecting the ethos of the series.

Keith chose to describe the Capitol Complex in Chandigarh which he and his wife Vanessa had visited in 2007 as part of a grand tour of India and his sketch of the Secretariat drawn at the time is the featured image here. Chandigarh, an entire new city was planned initially by Albert Mayer and then by Le Corbusier along with Maxwell Fry, Jane Drew and Pierre Jeanerret . Chandigarh was established as the new state capitol for Punjab following Partition in 1947 and the ceding of Lahore the former state capital to Pakistan. Largely adopting Mayer’s grid plan, an appropriate move perhaps on a site which was an open expansive plain just south of the Himalayas, Le Corbusier went on to design and oversee construction of the capital complex. Comprising 4 primary buildings namely the Palace of Assembly, the Secretariat, the High Court and the Tower of Shadows, the 26m high Open Hand sculpture completes the major set pieces. Corbusier worked on the project from 1951 almost until his death in 1965 and created on of his most enduring and powerful works.

In his text Keith notes…“Chandigarh’s Capitol is one of the 20th century’s greatest architectural achievements. It gave appropriate architectural expression to a new city in a newly liberated nation that showed great faith in the power of bold new architecture to send a signal to the world: “We are at once an ancient civilisation but also a modern democratic state ready to takes our place in world affairs.”

The full article, 50 Wonders Capitol Complex Chandigarh, can be found online in Building Design and was also published in Building 17 September 2021 page 59.