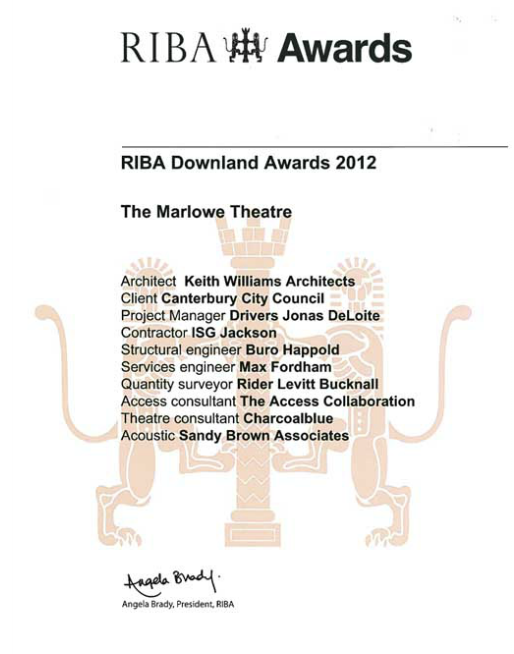 Keith Williams’ head of marketing, Vanessa Shrimpton along with the clients for the Marlowe Theatre, collectively Colin Carmichael CEO and Janice McGuiness of Canterbury City Council along with Mark Everett, the Marlowe Theatre’s Director and Paula Gillespie the Marlowe’s Associate Director, attended in person to receive their award.

Keith Williams commented, ”These awards are extremely difficult to win and are only given to the very best projects in any region. Building contemporary architecture in historic cities such as Canterbury with its cathedral and UNESCO World Heritage site is always a great challenge. The award is testament to the faith invested in us and the project by our clients at Canterbury City Council and the Marlowe Theatre, and it is most rewarding that the Marlowe has been celebrated in this way”

The Marlowe has quickly become the most importance performing arts venue in the south-east and is already contributing to the revitalisation of the western portion of Canterbury city centre.

At a separate ceremony on the 21st June, the following day, the Marlowe Theatre was also awarded both the East Kent People’s Award and the Cultural Landscape Award (Canterbury Culture Awards) crowning an exceptional few days for both the Marlowe and Keith Williams Architects.